A possible solution is to utilise fringe benefits tax (FBT) exemptions, specific to the sector, which unlock extra financial resources and increase the attractiveness of the salary package to the prospective employee. However, it can be a tricky area because of the confusion surrounding what can and can’t be done. With the end of the FBT financial year fast approaching, it is a good idea to review the do’s and don’ts of FBT.

As a starting point, organisations need to assess which category of not-for-profit organisation they fall under. This then determines the capping thresholds applied to each employee in order to avoid incurring FBT, as shown in the accompanying table. 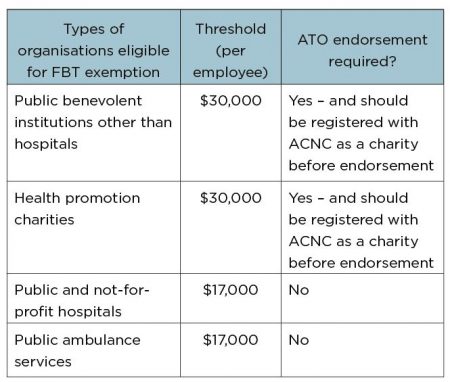 In addition, there is a separate single grossed up cap of $5,000 for salary packaged meal entertainment and entertainment facility leasing expenses. If this cap is exceeded, then the excess can be offset against the general cap thresholds. The next step for organisations is to ensure that whatever they offer to employees complies with any awards or enterprise agreements, and the benefits provided are effective in attracting the appropriate staff. Common examples of types of expenses offered by not-for profit organisations include mortgage repayments, provision of motor vehicles, meal cards, rent and school fees.

The expenses listed above would be factored into the capping thresholds as they are mostly private or non-deductible in nature. However, other expenses do not affect the capping thresholds and can sometimes be overlooked. These include purchases that employees could otherwise claim in their tax return such as membership association fees, laptop computers which only have minor private use, and professional development.

In Australia, trusts are routinely used as an investment or trading vehicle. There are several different types of trust structures available, but the most commonly used is a discretionary trust such as a family trust.…

For Impact is HLB Mann Judd’s regular newsletter for the Not for Profit sector, covering governance, ACNC updates and financial reporting insights.

Our End of Year Update 2022 newsletter addresses a number of topics relating to 2021/22 tax savings and end of year business planning.